Tropical Landmark For Huddersfield University.AD Metal spinning recently completed a series of copper spinnings which have been used in a sculpter designed by Kate Maddison. The sculpter which is now situted in the Huddesresfield unversity in the bulilding occupied by the School of Applied Sciences.

The following text below is taken from the artical that appeared In the local Huddersfiled Examiner. A NEW sculpture has been unveiled at Huddersfield University’s Shore Head building. And, amazingly, it recalls the days when Huddersfield was in tropical seas close to the Equator! The work is inspired by undersea creatures from 300 million years ago. 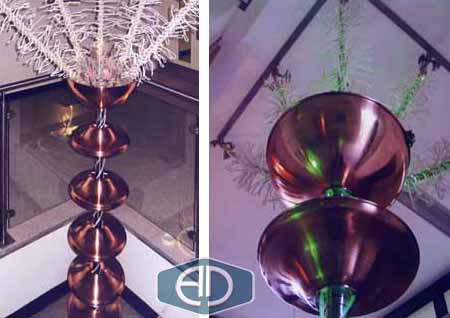 Now the work of art has been given pride of place in the entrance to the School of Applied Sciences.
Yorkshire artist, Kate Maddison, from Chrysalis Arts, has spent eighteen months working on the project in conjunction with university staff and local firms.
She said: “I wanted the piece to relate to the department and to Huddersfield, but it needed to be tall, whilst not taking up too much floor space.”
Taking inspiration from the name Shore Head, she wanted the sculpture to capture elements of light, movement and the sea.
It uses local stone containing crinoids – five-limbed prehistoric sea creatures similar to starfish, from when Huddersfield’s place on earth was in the deep, warm ocean, close to the equator.

The crinoid sculpture is suspended from the ceiling by five ropes incorporating fibre optics, which are fixed to the floor, with the changing colours and movement of the ropes representing the sense of being underwater.
Colin Bamford, Associate Dean of the School of Applied Sciences, said: “It is a wonderful piece that stands out in the foyer of the refurbished building.”
Professor Robert Smith’s Expert Verdict next week details the fascinating world of crinoids.